[NPC] Gino Gambino is a Gaia NPC. He is the son of the infamous Johnny K. Gambino and the lovely Rosalie. After years of hardship he discovered he was half titan via his father's bloodline.

Gino Gambino is an adult male half-human/titan with blond hair, purple eyes, and light skin. When he was first introduced by Johnny, he was a small kid with short messy hair and large eye brows. His oversized clothes were a white dress shirt, purple vest, and red shorts held up by a " G " buckle belt and black loafers. Prior to his transformation Gino's official stats were as followed: 4'll"ft, 85lbs, Type AB[1]

He is now taller with longer hair tied into a ponytail. He was last seen wearing a white shirt, pants and a purple vest with black boots.

Gino was a shy kid with low self-esteem and tried everything to make everyone happy. He gradually gained confidence when he dawned a a mask and attempted to be a hero. His journey towards self-confidence continued when his life was put on the line various times.

Gino was the decedent of a titan. 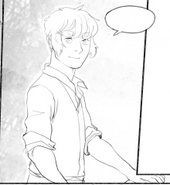 Retrieved from "https://gaia.fandom.com/wiki/NPC:Gino_Gambino?oldid=171706"
Community content is available under CC-BY-SA unless otherwise noted.