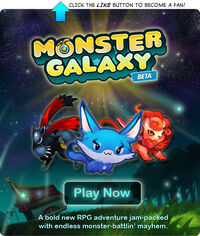 Monster Galaxy is a Facebook application located in the Game category, and created by Gaia Online. Appearing around mid November of 2010. The app is inspired by the popular franchise Pokémon and various other creature catching series. The creatures in the game are Gaia World related, seen from various item releases such as Chance Items, Evolving Items, and creatures original to the game. Their strengths and weaknesses are determined by astrological signs, which act similarly to elemental types. There are 11 Moga creatures for most zodiac signs, such as Aries, Taurus and Capricorn.

Catch Them All! Collect wild monsters and battle to tame the zodiac and save the world.

Moga are one of the most essential factors of Monster Galaxy as their capture is the premise of the game, the name of the species is derived from the first two letters of the games title: 'Mo' and 'Ga'. These are creatures that have special abilities and appearances. For example this sheep-like creature named Mimples.

Retrieved from "https://gaia.fandom.com/wiki/Monster_Galaxy?oldid=169136"
Community content is available under CC-BY-SA unless otherwise noted.