Gaia Online (formerly known as Go-Gaia) is an online forum and games site founded on February 18, 2003 by Derek Liu (Gaia username: Lanzer), Josh Gainsbrugh (username: L0cke), Long Vo: (username VO) Rosann Yip (username: Ling) and a team of their friends, Studio XD artists, and programmers/web designers. The site currently revolves around its forum , avatars, and in-game currency, but is expanding to include features such as games (slots, cards, and fishing), Gaia Towns and homes, and the Marketplace. Note that Gaia Online's forums- most obviously the Guild System- are heavily modified PhpBB software.

Gaia's forum is the second largest (some say third largest) forum-based community on the Internet, with over 440 million posts (plus over 350 million in storage), over 23 million registered users, and an average of 20,000 or more people online at any given time during the day. The most users ever online was 102,092 at 5:54 pm on Monday, September 03, 2007, due to a announcement a few days earlier that pledged that on September 3rd, Gaia would have over 100,000 people online. Participants received a prize.

On Gaia Online, each user can create their own virtual character (or avatar) and customize it through clothing and accessories located in virtual shops throughout the site. The customizations begin with choosing gender, skin tone, eyes, mouth, and hair style and color. From there, the user tries to earn "Gaia gold" by doing everything from chatting on the plethora of forums to choose from, rating in the galleries (there are many galleries including art, avatar, and homes), answering polls, and more. Almost everything done on the site can earn a user gold, which can be used to buy clothing and accessories, which a user can in turn use to customize their avatar.

Gaia Online is free to play (although it features three cash-only shops) and is able to be reached at www.gaiaonline.com.

One of the newest and most exciting developments is zOMG!, a Flash MMO. It has recently been opened to all users. 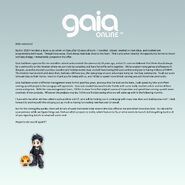 Twitter upload (lanzer is Back)
Add a photo to this gallery

Retrieved from "https://gaia.fandom.com/wiki/Gaia_Online?oldid=161539"
Community content is available under CC-BY-SA unless otherwise noted.