The Easter Day Event 2010 was a Gaia Online event.

Prior to the announcements, colored eggs called: Grunny, Easter, and Gambino eggs scattered around Gaia's landing pages: Home, My Gaia, Shops, Forums, World, Games. They were told by collecting eggs, they would be granted a prize. When Gaians were on the Reward page, there was an animated grunny named NPC:Diedrich to greet them, clicking him led to his profile.

Along with the forum event was zOMG! with its own Easter related event and items. It began on April 1, running till April 11. Village Greens was decorated with an Easter theme: eggs hanging from ribbon wrapped trees and Gnome mushroom homes painted pastel with eggs decorating them. This festive theme caused the General Gnome to retreat to his mushroom, but if players wanted to fight him they could confront him inside his own home.

There were rare Golden Egg with an HP of 3,500. While soloing the egg was tedious to crack, but with a crew or various other players the cracking of the egg would reward players with a Golden Ticket and Gold. There was also a new recipe, two new badges, chicks to capture and chicks that would follow a player around, and a special golden egg that hatched some time after the event ended.

While both events ended on April 11, The Golden Egg from zOMG! was cracked on June 1 by NPC:Nicolae, he extracted the yolky lucre which contained the items: Regal Adornment and Ring: Fortune's Favor.

You found an Easter egg! 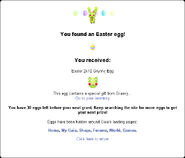 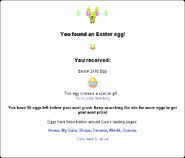 Retrieved from "https://gaia.fandom.com/wiki/Easter_Day_Event_2010?oldid=174233"
Community content is available under CC-BY-SA unless otherwise noted.