The April Fools' Day Event 2011, known as Welcome to Meowbook, was a Gaia Online event.

When signing onto the site Gaians were redirected to the 'My Gaia' page, there they were greeted with a blue themed page and cat heads occupying their friends thumbnail box. In the 'My Stats' box their own avatar was also seen with a cat head. The event header also contained various cat heads and the clickable logo brought to you by Meowbook. Within the header was a tabby striped Wing Sticker and flying around the screen was a Item:Pink Magical Giftbox, upon clicking these links Gaians would receive event items.

The event concluded on April 3, by then the cat-themed features had been disabled as to not make things distracting. 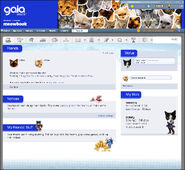 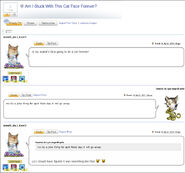 Example of a Gaians with cat heads

Received by signing up for Meowbook 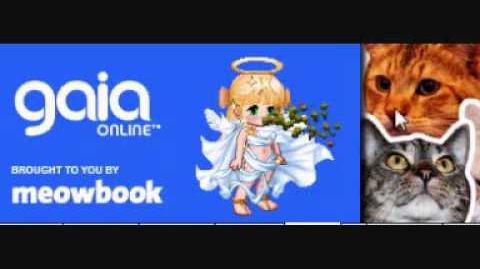 Due to April Fools' Day on Gaia being a mix of positive and negative reactions in general, Meowbook received a similar reaction; the positive being that the prank was more obvious compared to previous years and since Gaians usually criticize Gaia Online for trying to be Facebook (or even associating with it) the theme had impact.[1]

Some users had an issue with the cat heads covering avatars or the motif and wanted an option to opt-out. There was a controversy when it came to the function of the word filter altering "God" to being "Bastet" (feline goddess of Ancient Egyptian religion).[2] Users who brought up the matter found it to be censorship or insulting to one's religion. The use of the filter was also said to be intrusive, even though a setting change would have rendered the cat themed text back to default.[3]

With the cat heads bringing amusement to those who enjoyed the event, users tried to match their random cat head with their avatar. The emotes were also well received, this spurred fan request to keep them.[4]

The event was complimented for being well put together and clever. Criticism by those who did not enjoy the event said it was poorly put together and less believable as a joke than in previous years, and although the items were liked for the event they were considered minor in comparison to other event items.

Retrieved from "https://gaia.fandom.com/wiki/April_Fools%27_Day_Event_2011?oldid=174202"
Community content is available under CC-BY-SA unless otherwise noted.