An Animated Item (AI) is a Premium Item that display frames of animations when equipped to an avatar.

Animated Items were introduced 2010 May 27, when the twin stars Mintaka & Rigel took over the La Victoire. The items are crafted by their younger siblings stars Saiph & Hatsya. With these new items a new tab appeared in the Gaia Inventory titled "Animated" (now "Astra" as of 2016). 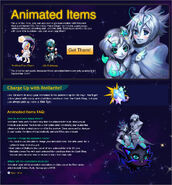 Retrieved from "https://gaia.fandom.com/wiki/Animated_Item?oldid=177818"
Community content is available under CC-BY-SA unless otherwise noted.