A pilot and crew

Airship is a vehicle featured in Gaia Online events. An airship is a self-propelled, lighter-than-air aircraft with means of controlling the direction of flight; dirigible.[1]

Airships are unique vehicles seen in the world of Gaia. More often than not they are literally shaped like a ship one would find at sea. It is unknown what powers these ships (say one) but they have the ability to navigate the skies, in manga 43 A New Man, it is revealed that airships are kept afloat by a special tree called a Casimir Tree, they can also be temporarily fueled by 'Casimir Matter', which are from the trees seed pods.

The first airship Gaians were introduced to was The Bifrost in April 2009. The Bifrost is piloted by Captain Cresento, a rather arrogant captain who who sails around the skies of Gaia letting its citizens know that he has an airship and they don't. This ship is brown and gold in color, it has many windows and has several red colored wings and two large engines with gold propellers located at the back.

The second airship was introduced in October 2009. It is piloted by a charismatic wizard named NPC:Brennivin who hails from another world. The official name of his airship is unknown, but the ship doubles as a home and clothing shop named the Dernier★Cri. Brennivin was also owner of another unnamed ship seen in December 2009, the ship was given to NPC:The Overseer and the NPC:The Sentinel when Cresento crushed their original makeshift airship, which was fueled by the Cheer Engine. The original makeshift airship was built out of items from a junkyard and consisted of a large porcelain bathtub attached to a square box made of wood. It had a candy-striped mast and a patchwork sail.

The Dernier Cri airship holds a massive building with unique architecture, glowing lights, and statues. The airship that was gifted to the Overseer was rather simple in design and very plain, with the bow painted red and green, and the mast being a silver casimir tree. Afterward it was decorated and given a bit more gloss, with stability wings that were painted orange and white with lanterns at its tips, the sail being white and green. The Oveerseer ended up tying the life preservers and bathtub from the the crushed airship to the side of the new airship.

Beginning on August 12, 2010, Airships were the main theme for the summer event. In manga 46 An Old Friend's Duty, NPC:Edmund sets out to find NPC:Gino Gambino with the help of Brennivin, only the two were halted from their journey when they were attacked by vampires in bat form, as they attempted to follow them they were met by a grand sight a fire which seemed to be in midair, but as it turned out, it was an old demigod that had been attacked by the passing vampires. In an attempt to help the creature Edmund began to collect Casimir Matter and had a plan to use the seed pods to fuel enough airships to help the demigod. 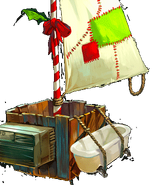 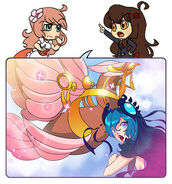 Retrieved from "https://gaia.fandom.com/wiki/Airship?oldid=177913"
Community content is available under CC-BY-SA unless otherwise noted.